Home My Car Car Articles History Of The Automobile

It all started in 1806 when Swiss inventor named Francois Isaac de Rivaz made ​​the first internal combustion engine. This engine was fueled with a mixture of hydrogen and oxygen and de Rivaz used it to equip what might be called the first means of locomotion with propulsion ever ever built. However, his first project was rudimentary and, therefore, was not commercially successful.
The first car in the world with an internal combustion engine was built by Siegfried Marcus. The idea of using gasoline as a source of energy for vehicle propulsion came to Marcus virtually accidentally. The austrian, accidentally fired a mixture of gas vapor and air. Thus, in 1964, the first gasoline engine was mounted on a carriage, and in 1875, Siegfried built a new version of its vehicle, an improved one. However, the inventors of the first car in history are officially considered by German engineers Daimler and Benz.

Austin 7
Only in 1885, Karl Benz, a German engineer and inventor, built the first internal combustion four stroke engine fueled with petrol derived from oil. Although many German engineers of the epoch worked on their own version, Karl Benz is credited as the true inventor of the engine. He used his invention to equip the first car in the world that was not really more than a three-wheeled motorized chair. Later, Benz designed four-wheel models with improved engines and in 1888 started in Germany the first automobile production in series. Benz’s license was taken in France by Emile Roger, in 1898, Louis Renault produces its first automobile. In 1901 Peugeot appears and around the year 1903 begin in France the serial production of cars. 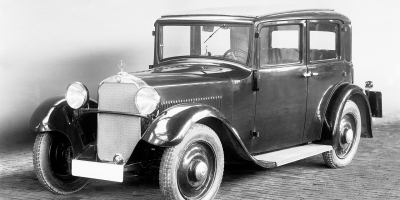 Benz automobile
In the U.S., two men have had major influences in the automobile industry, Henry Ford and Ransom Olds. Olds is the founder of the manufacturer Oldsmobile and was the first to come with a low priced car in mass production, so that the general public was able to afford it. However, Henry Ford is the one that will revolutionize the automotive history both by design changes, but especially with the large series production of in which his car, the Ford Model T, is created. Ford’s assembly line was considered a model for maximum efficiency, reaching in 1914 to be produced and sold 250,000 units. 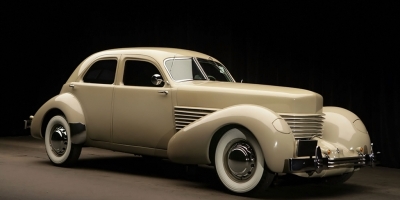 Cord 810
In the period 1920-1940 appear new building vehicles companies such as Chrysler (1925), Pontiac (1926), LaSalle (1927), Plymouth (1928). In 1922 appears the first car with unitary bodywork: Lancia Lambda with four-cylinder engine, independent suspension and brakes. Austin 7 appears on the UK market in July, its design was later taken over by other famous brands like BMW and Nissan. In 1929, Alfieri Maserati builds first racing car: Maserati Tipo 26. The period of the Second World War is a time of stagnation for car production, especially in Europe whose efforts are focused on the production of combat vehicles. Aware of the necessity to enter the war, the americans design a vehicle able to travel on any terrain. Thus Chrysler built the first Jeep car type, patented in 1943. After the war, in 1946, are made in Germany first 10,000 copies of the Volkswagen Beetle and in Italy, Enzo Ferrari launch Ferrari 250.

in the next episode we will see what happens in the 50s and to present and the engine history.